CarbonCheck is a comprehensive soil carbon testing service developed by industry experts, customers and advisors to measure, monitor and benchmark carbon levels in your soil. 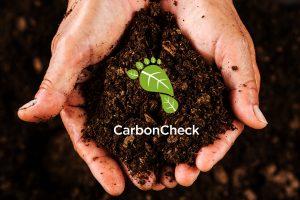 Our CarbonCheck service includes the following analyses, which combine to give a carbon stock measurement in tonnes per hectare.

What is soil carbon?

Regularly measuring carbon in soils is an effective way to benchmark soil health and plan how to improve it in the future.

There are many benefits of increasing soil carbon:

The CarbonCheck report are presented in an easy to understand format and is straightforward to interpret. 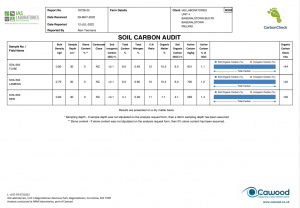 1. Plan where to take samples. Identify different areas or zones by considering the environmental landscape, soil type, land use and areas where different treatments have been applied. Once the areas have been divided into several relatively homogeneous units, called strata, apply random sampling within each stratum. Avoid patches with animal manure, animal pathways, field entrances, areas near water / feed troughs and other unusual features.

2. Sampling depth. The Food and Agriculture Organisation of the United Nations report on measuring carbon stock specifies a sampling depth of 30cm to account for the differences in the soil profile. On shallower soils, samples should be taken as deep as possible. The depth sampled should be provided on the request form accompanying the samples (otherwise assumed to be 30cm for carbon stock calculations).

3. How to sample. A minimum of 5 cores should be taken at random within each stratum to make a composite sample (a greater number of cores provide a more representative sample and the number taken should be appropriate to the size of the area covered). A clean auger should be used to take cores over the area in a W pattern.

4. Preparing the samples. Mix the soil cores for each composite sample in a clean container and remove all roots, plant material and accumulated surface organic matter. Select around 300g and put in a labelled grip seal bag.

We use cookies to ensure that we give you the best experience on our website. If you continue to use this site we will assume that you are happy with it.
By clicking “Accept”, you consent to the use of ALL the cookies.

But opting out of some of these cookies may have an effect on your browsing experience.
Necessary Always Enabled
Necessary cookies are absolutely essential for the website to function properly. This category only includes cookies that ensures basic functionalities and security features of the website. These cookies do not store any personal information.
Non Necessary
Any cookies that may not be particularly necessary for the website to function and is used specifically to collect user personal data via analytics, ads, other embedded contents are termed as non-necessary cookies. It is mandatory to procure user consent prior to running these cookies on your website.
Save & Accept